You are about to be enslaved by the USMCA

...unless you act immediately!!!

URGENT...we must shift our efforts entirely to President Trump before he signs it!
There is a remote chance that he has been deceived and we can alert him to it.
Otherwise...
it will not be long when we realize we are no longer a sovereign nation,
but a North American Union like the European Union.

The following article was edited for brevity. Clicking on it will open the actual webpage of the article. 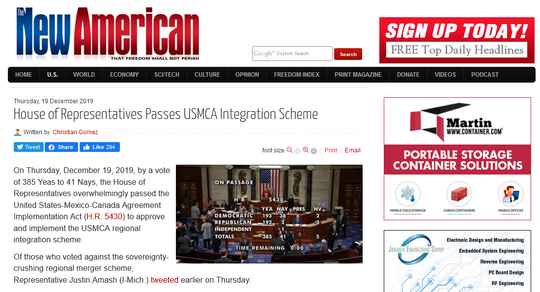 Click on the image above to get the "inside story" of this historical treasonous vote.
URGENT!
Now we must shift our efforts entirely to Congress!
Date:  Thursday, December 12th, 2019 23:18
USMCA Exposed: Towards a North American Union
Following the United States, Mexico, and Canada’s signing of the “progressive”
Protocol of Amendments to the USMCA, on December 10, 2019,
The New American’s Christian Gomez exposes how the actual purpose of the trade scheme
is to integrate the region into a North American Union (NAU).
https://www.youtube.com/watch?v=8zDGwTBMIZI or https://youtu.be/8zDGwTBMIZI
🚨 Get the Latest News:
http://www.thenewamerican.com/
📲 Let's Connect!
http://www.facebook.com/TheNewAmerican
https://twitter.com/NewAmericanMag
https://www.instagram.com/newamericanmag85/